Run of the House 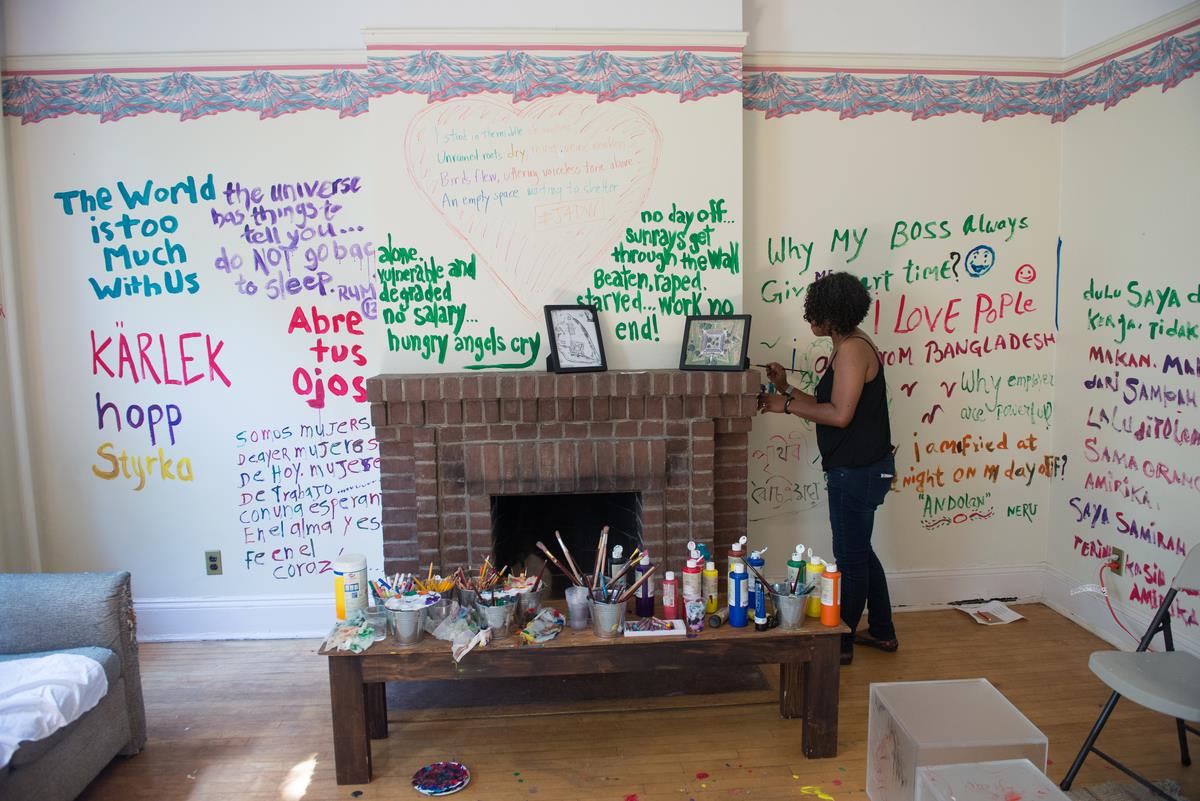 A woman’s work is never done—it just gets passed on to someone else. For the nannies, housekeepers, health aides and other caregivers in New York’s middle- and upper-class households, work means carrying others’ burdens: tricked-out strollers and spattered baby food, damp diapers, and dry cleaning—or the family secrets tucked behind a genteel exterior. On Sunday, Christine Yvette Lewis captured a bit of the warped edifice of American domesticity and colored it with memories of her native Trinidad. Taking a paintbrush to the wall of an old cottage, she depicted an island house from her homeland, and below, scrawled a scene from the adopted home where she works today: “Push Pale Pampered Baby in Ornate Pram Along Pompous Avenue … A Tale of Two Cities.”

Though domestic workers are often known only for their quiet servitude in the homes of others, amid the stress and isolation of their job, they occasionally snatch a rare moment of play. On Sunday, “the help” had their run of the place in a stately cottage on the sun-soaked strip of Colonel’s Row on Governors Island, off the Manhattan Coast. A group of domestic workers went rogue and spent the day scrawling poetry, protest slogans, and particolored Devanagari script on the white plaster walls. The workshop brought together a crew of primarily immigrant women, many of whom started their careers as domestic workers and eventually became labor activists and women’s rights advocates. The art-making event was coordinated by the event series Writing on It All and Andolan, a South Asian domestic workers’ group, and participants of a domestic workers writing workshop coordinated by poet and activist Mark Nowak. (To hear an excerpt of an interview with domestic worker advocate Nahar Alam at the Governors Island workshop, please click here.)

Some of the writing on the wall reflected unspeakable trauma (“Beaten, raped, starved, work no end!”). Others expressed frustration and a growing willingness to challenge authority (“Why employer are powerful? Why my boss always give me heart [hard] time?”).

While the walls were populated with writing and imagery, women waved hello to a laptop screen that broadcast a live video chat with a similar group of domestic workers in London, part of a global network of women worker advocates that has crystallized in recent years. Meanwhile, Claiming Our Voice, a documentary about Andolan women producing a play reflecting their own experiences, screened on the upper floor.
domestic_workers_2

Courtesy Angela Jimenez/Writing On It All

Nahar Alam, a former domestic worker and founder of Andolan, beams with pride as she watched fellow activists’ putting their imaginations on display, on the the stage, the screen, and now, the wall. The graffiti verses of poetry represent a different form of protest, she said. “When you march, you follow, and when you do this, write on a wall, you do it from the inside. This is … different, but it’s the same powerful message.” For workers who have long been denied any outlet through which to assert their individuality, or even their personhood, she said that art “is a different release, and also powerful in the same way. We’re writing from our heart.”

Meanwhile, Lewis lovingly vandalized her corner of the living room with her quaint Trinidadian bungalow framed by palm fronds, a world away from the concrete of Manhattan. Through articulating her memories on the wall, she said, “I go there … I yearn for the Julie mango. I yearn for the island.” But to mark off where reality invades her imaginary idyll, she added the line about the Pampered Baby on Pompous Avenue—the bleak caption always underlining her daydreams.

For women whose daily labor involves equal parts love and hate, it’s rare that they have a chance to create freely this way. Yet, caregiving, in Lewis’s view, is an art form unto itself, because “as immigrant women, as women who work as women in the homes, we have to create, yeah?”

Since she arrived in New York about 20 years ago, she’s earned her living as a domestic worker while writing for pleasure on the side. She previously worked as a teacher of English literacy classes and has published some of her poetry before. She recently began writing creatively about her day job, offering new perspectives on what it means to be a nanny. Her poems sometimes refer to home; for example, a romance set in the tropics or cravings for familiar fruits. But she hits a deeper emotional chord when charting the rhythms of the banal and strumming overlooked crevices of the a stranger’s house.
Photo by Michelle Chen

At a recent reading, Lewis picked apart the world that created her vocation, crisply ticking off the entitlements and privileges she must juggle: “Finger paints, pancakes, Skittles, scones. Dustpan, Swifter … . Did someone say ‘light housekeeping’? Ever such a thing?” She inwardly mocked the tedium of impressing a prospective boss: “Interviews? Four time this week. How many ways to clean poop?”

But beyond the phrases muttered under one’s breath or the bristling at petty routines, the worker is elevated as the protagonist, possibly even a heroine, as her list of tasks builds into a catalogue of multiple identities: “Ageless, stoic, divas, invisible woman, decision-maker, pre-K teacher, Superwoman, you ain’t—Mary Poppins was fictitious.”

The magical English housekeeper may have been the stuff of cinematic fantasy, but the women in the house were putting their lives on stage as well, bringing their hidden gifts into the foreground, for once.

Do her employers know about her other career? They have some idea that she has artistic interests outside of work, but the craft of domestic work requires both discretion and intimacy.

Dabbing the paintbrush on the plaster and cocking her head pensively, she wonders if her employers see her as a creator as much as a caregiver. “When we work as creative people, and as people who give care,” she said, “it’s not about a pat on the back, you know? … I’m looking for recognition for women. For women’s rights, a woman’s movement, an immigration woman’s movement. I’m looking for accolade for that.” Looking around at the paint-spattered cottage, bustling with women in kurthis and blue jeans, brimming with a kind of indulgence usually reserved for the people they serve, she felt a certain sense of plenitude.

“As long as that is recognized and respected, I’m good to go. I’m happy for that.”