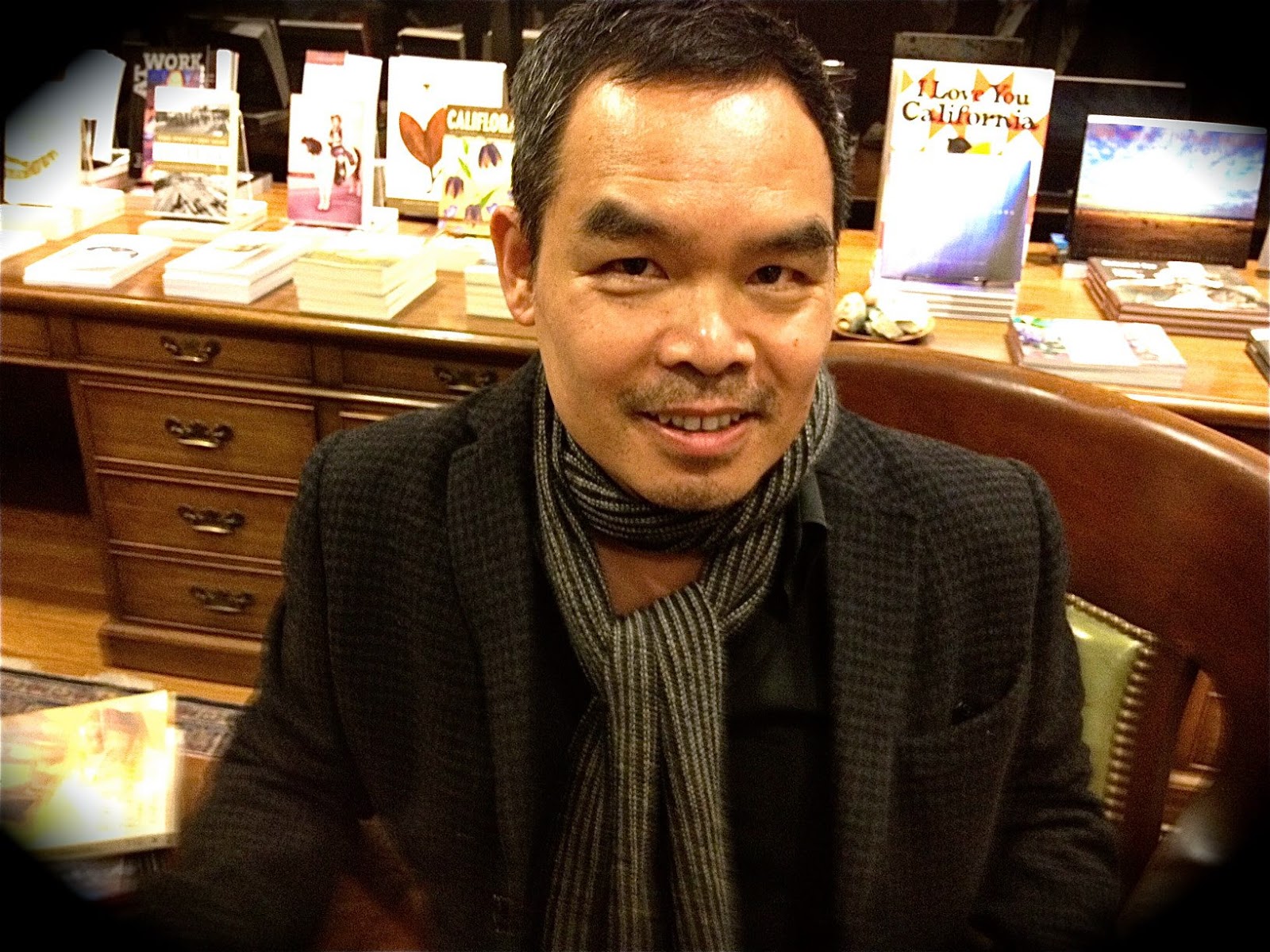 The son of a Vietnamese family rocked by war, Andrew Lam grew up amid the Bay Area’s vibrant immigrant bricolage, which has shaped the region’s cultural boundaries as well as his work as a journalist, activist, and author of fiction. In his latest book, Birds of Paradise Lost (Red Hen Press), Lam’s short stories trace the contours and conflicts of migrant life in the post-Vietnam War diaspora—through characters who span borders, generations, and a broad social spectrum. Read “Show and Tell,” from Birds of Paradise Lost, here.

Michelle Chen: You’ve been a journalist, a radio commentator, memoirist and now, fiction writer. Why the genre shift?

Andrew Lam: I have been a fiction writer right from the start. The trouble was that I could never make a living writing fiction so got into journalism by sheer luck—a classmate at my MFA creative writing program introduced me to essayist Richard Rodriguez, who was editor at Pacific News Service. He hired me to write commentaries and news analyses.

What can fiction do that non-fiction can’t? It can get into the secret lives of people, reveal their inner thoughts and yearnings, and get closer to the human experience and beyond. I can be a lot more versatile writing fiction—speaking in a voice of an old man or an angry teenager or a traumatized woman. I can embody their lives in a way a journalist can’t. Birds of Paradise Lost was cathartic for me to write, as I got to really let go of my own ego, live someone else’s life, and get at the core of their suffering.

You introduce an earlier book of yours, East Eats West: Writing in Two Hemispheres, with a description of the imaginative space “between East and West, between languages, between memories and desires.” For me, the phrase “writing in two hemispheres” evokes a cultural or geographic divide, but also the supposed division between the emotional and rational. What is the essence of a hemispheric outlook from your perspective?

It is both regions of the brain as well as the conflict between East and West. It struck me early on that a lot of people feel they have to choose between A and B when really they should be trying to balance opposing ideas. When I wrote East Eats West: Writing in Two Hemispheres, I was chiefly thinking about how to build bridges between dissimilar sets of values. Mine, after all, is a world complicated by memories, ambitions, and displacement—and it refutes simplification. At home, I speak Vietnamese and French. In the office, I speak English, my language of choice. Americans celebrate birthdays. The Vietnamese celebrate death anniversaries. In Vietnam, I bowed to teachers and never looked them in the eye. In America, my math teacher told me I was “shifty” when I didn’t look at him directly. Such are the strange bearings for those of us who lurk between East and West, between languages, between memories and desires. However, where the two hemispheres over-lapse, is where I learned and relearned how to mediate opposing ideas and to bridge disparate viewpoints. It is barely charted territory, and fraught with contradictions and tensions, but fun and exciting as well.

Your characters in Birds of Paradise sometimes embody stereotypes—of Vietnamese refugees, queer Californians, and lonely but assimilated “successful” immigrants. But they also subvert and challenge those stereotypes. How do you lure people with the familiar and then spring the strange on them?

I am sometimes asked about what kinds of “literary devices” I employ. But I don’t think in terms of technique or try to play on stereotypes or any social construct. I leave a lot of assumptions and theories at the entrance to the fiction world. When I hear a voice—as in the girl in “Slingshot” who speaks in a particular way, or Bobby’s voice in “Show & Tell”—I feel like I have to tell that story. When a scene moves me, I live with it until characters are born. Usually, I don’t even know what the story is about; I have to listen hard until it’s revealed.

Once I know my character really well, it is as if she’s playing out her life in front of me and I’m simply recording it. I do, however, fine tune and play with themes or add a certain quirkiness in subsequent drafts once I get the core of the story down. I hone the characters’ decisions and gestures. But I never set out with the idea that characters should be “strange.” People are strange. Inner life is a labyrinth and a mystery—those who have experienced war and exodus have already inherited a whole world of strangeness, traumas, and sadness.

Some of your characters are patently unlikable but still sympathetic, like the teenager who accidentally fires a slingshot at the man carrying an urn of ashes, or the ambitious young woman who trades her dignity for a good deal at a yard sale. Do these characters, and the ambivalence with which you present them, relate to your work as a journalist who deals with real people in the community?

The fact that many of these characters exist at all has to do with my innate sense of empathy for those who suffer great losses. But empathy does not mean I cry for them. I learned quickly that you don’t cry for your characters or no one will cry for them. You let them cry when the time is right, if at all. Sometimes they laugh with tears, but whatever they want to do, they will do—that’s what makes characters believable. Really, the best you can do in fiction is to understand that characters have a certain amount of free will. They might do things that shock and embarrass you, things against your belief. But you have to let them do it.

As for why I incorporate certain things like cannibalism and self-immolation, I think it has to do with my limitations as a journalist. In that form, I can’t really get to the horror and sadness of something like a man watching his wife being killed on a crowded boat or refugees starving to death. I can’t fathom their helplessness unless I inhabit their skin. But in fiction, I can be there, on the boat, to record some of the horror by claiming omniscient understanding, and therefore claiming to know the survivor’s yearning and hope in the aftermath.

How does growing up the Bay Area color your view of migration and the immigrant experience?

I grew up in a city where 110 languages are spoken on any given day, Asians are the majority in K-12 classes, the Chinese New Year’s parade is mainly attended by non-Chinese, and the Gay Pride parade is attended by more straight than gay people. It is why I wrote East Eats West. In such a diverse place, I grew up confident that my voice, my perspective, my experience—my Vietnameseness—is an indelible part of the American story, even when mainstream media doesn’t acknowledge it. In the Bay area, lives influence one another and cultures are mixed and blended in so many ways. I think it’s marvelous—from food to religion, agriculture to music—the whole world comes here. The result, for those who can transgress the borders, is a rich, diverse and cosmopolitan life.

How have the rise of new media and the globalization of technology affected the way you think about migration and cultural interaction?

Once upon a time leaving home meant not seeing it again. Now you can watch your homeland news or movies online. You can chat with grandma on Skype or Google Hangout, and talk to relatives across the world for free. Ties with a homeland are stronger because migration is no longer a one-way fare. The number of people who travel through San Francisco’s airport in a single year exceeds the population of California itself. In a way, one needs to develop multiple affiliations to make sense of it all. We talk of diversity as a cultural phenomenon but we barely explore pluralism as an individual experience. I believe the most exciting contemporary literature incorporates this “internal diversity” aspect of the human experience. I’m thinking of Zadie Smith’s White Teeth, Kazuo Ishiguro’s When We Were Orphans, and that incomparable book The English Patient by Michael Ondaatje as prime examples.

It’s become almost a cliché to write about the “clash of cultures” when younger people in the Asian diaspora return “home.” What aspect of the so-called “homecoming” is most misunderstood—both by members of the diaspora and by others?

The notion of home is also not fully explored, so “homecoming” is a bit of a misnomer. Am I going home when I go to Saigon, my birthplace? Where is home? Is it rooted in geography or beginnings? Or is it in us? When I lost my first lover and became a writer, I thought of myself as someone who became exiled twice—first from Vietnam, then from the country created by the two of us.

Going back to Asia, there’s always a certain amount of strangeness for me. There’s that familiarity: I know quite a bit about Asian culture and have traveled much throughout Asia. There’s that sense of understanding of how a society functions beyond the cosmetic. Yet in Vietnam, I am both a stranger and an insider. I understand the language and the culture, but I don’t quite belong. My individualism is so strong that I end up standing out, being outspoken, and my humor is more West than East.

How does your work as a journalist and activist—particularly around the issues of race, war, and social justice—influence your creative storytelling?

You might be surprised to know that I don’t play the activist at all in fiction. As an essayist, I speak up on various issues of our times—discrimination, war, violence against the dispossessed. But in fiction, I realized early on that you can’t make your characters lecture people or else they’d commit suicide or turn into puppets.

The best I can do is provide the background—people who fled from Vietnam to the U.S., life in a run-down restaurant, someone living in a black-dominated neighborhood—and let the characters live out their lives. It’s a simulation in which I am constantly surprised by what these characters do next. When I write fiction, a different part of the brain takes over. I enter a dream world. I drop my own morality and my penchant to sermonize. The result is always unexpected—i.e., they fall in love with someone who shot their spouse, or shoot an urn full of their own father’s ashes.

If you were to give one book to someone who just arrived in this country, what would it be?

Trickster Makes This World by Lewis Hyde. It can be a little too intellectual for some but the message is this: You can be a trickster and rewrite and realign the borders, the rules, and the demarcation that tells you who you are suppose to be. You can move toward the center with cunning and art. And transformation is possible, not just for the self, but for society as a whole, when you cross those lines.

Andrew Lam is an editor at New America Media, an association of over 2000 ethnic media organizations in the U.S. He is also the author of two previous books, Perfume Dreams: Reflections on the Vietnamese Diaspora, and East Eats West: Writing in Two Hemispheres.